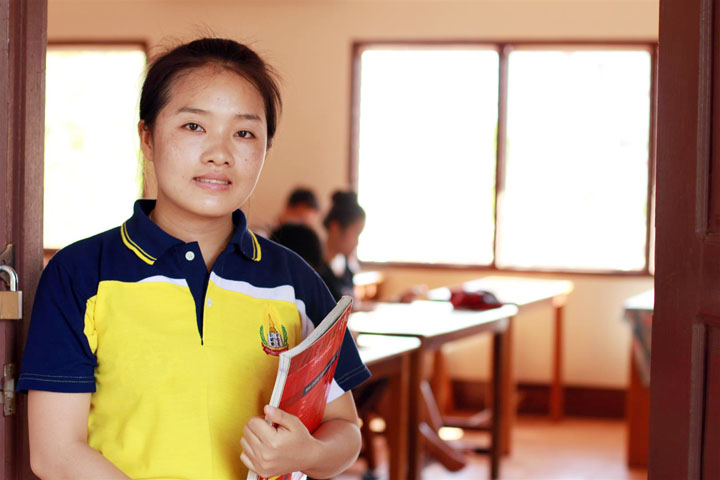 Aiher Saupor is determined to continue her education despite poverty and her parents’ disapproval. “I have seen my parents working so hard in the field and they still live in poverty. That’s why I don’t want to be the same. I wanted to study and get a job,” says the 22 year old from Houn district in Oudomxay Province.

Such ambition sometimes seems beyond a poor Hmong girl from a rural area.  For many children in her community drop out from school, especially the girls. Their parents tend to see education as more important for boys and they value the work that girls do at home.

Aiher’s father was a pick-up driver while her mother was a farmer. However her mother fell sick and died when Aiher was at high school. Her father then had to stop driving and worked in the fields.  He only saved enough money to send their eldest son to the university in Vientiane.  As a result, her three sisters had to drop out from school to help the family. Aiher did not give up no matter how difficult life was.  “After my mother died, I had no hope to continue my studies. My grandparents and other relatives told me to stop school.  I begged my father to support me to study until I finished high school at least,” Aiher recalls.

Aiher asked her father permission and some financial support to come to Vientiane to sit the entrance examination at the National University. “I promised my father that this was going to be the last time I ask for money from him. I decided to go to Vientiane with the one million Kip my father gave me,” she says. Aiher got a place at the university, and then she received a Laos Australia National Scholarship (LANS) in 2012.  She is now in her third year of a Bachelor of Chemistry Education degree at the National University of Laos.

“If I didn’t get the scholarship I think would end up like my three sisters who all dropped out of school and got married,” Aiher says. “My parents always said why a woman should bother to go to school. Just get married. I believe education will give me a better life.”

The LANS program is designed to help both girls and boys from poor rural areas to continue into higher education. The program especially helps girls to bridge the gap between high school and university, the time when they are most likely to quit school and find paying jobs instead. Since 2011, the LANS program has so far helped over 350 young men and women like Aiher.